Posted on January 5, 2015 by obscureecho 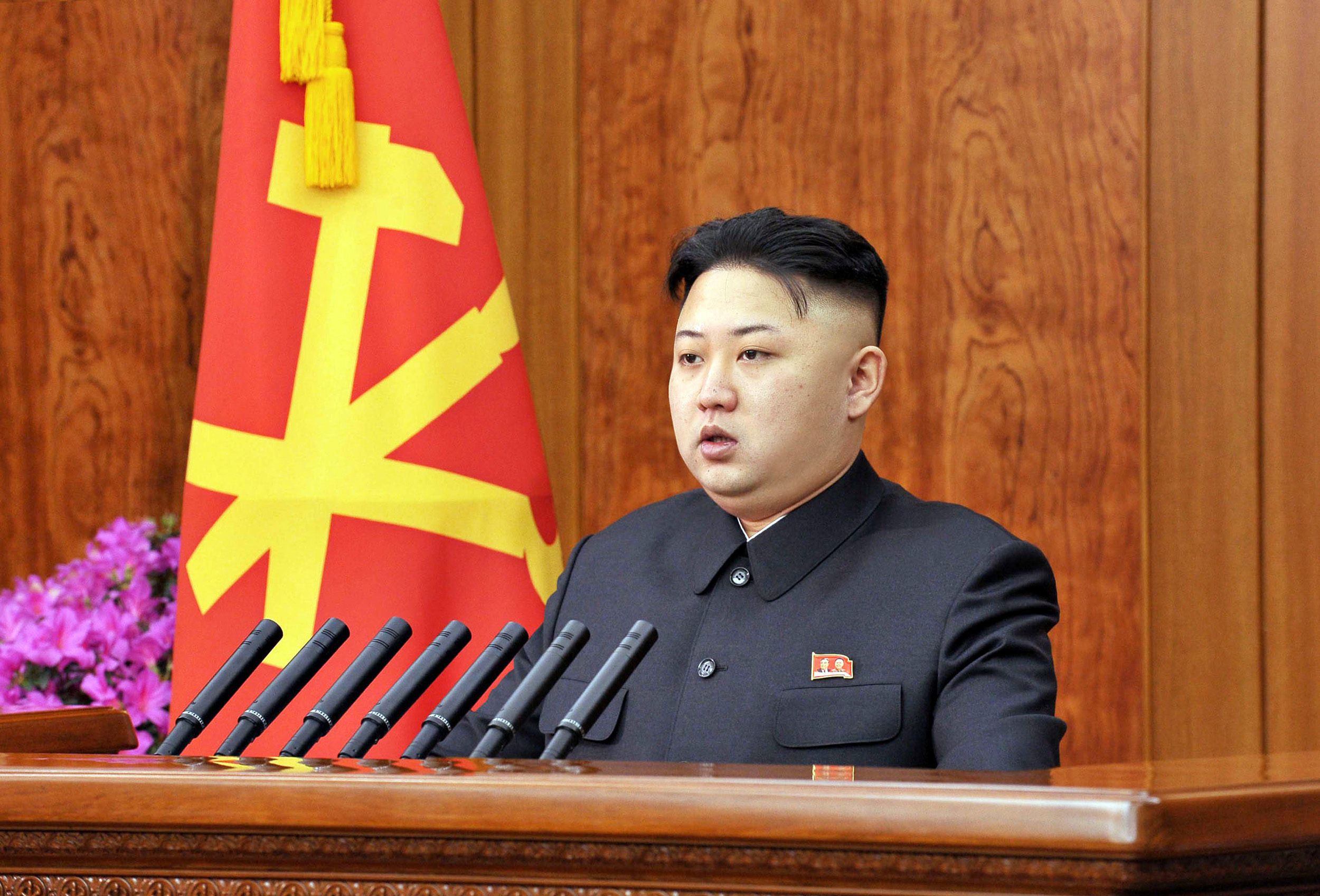 On New year’s day, Kim Jong-un, a man of many titles, such as Supreme Leader of North Korea, First Secretary of the Worker’s Party of Korea, and Supreme Commander of the Korean People’s Army, delivered a national televised speech in which he announced his plans for the new year.  It was a very brief speech, but in it, Kim outlined the programs and policies he believes will make North Korea “an economic giant” in 2015.  Throughout much of the speech, he went on about how great his country is, and how honorable his father and grandfather were.  He boasted of the successes of his regime achieved last year, which as you could imagine, were few real accomplishments.  The dictator gave his address with the usual nationalism he and everyone in North Korea are supposed to display, commending the DPRK’s people, army, and party for completing such a productive year.  Kim concluded this part of his speech by saying “I extend heartfelt thanks to all the service personnel and people who made a contribution to glorifying last year as a year of proud feats and changes by waging an unyielding struggle with a steadfast faith in the revolutionary cause of Juche and the revolutionary cause of Songun.”

In the next part of his speech, he remarked about how North Korea will strive in 2015, the 70th anniversary of the founding of the WPK.  The marshal stated that the country should maintain its military-first policy and would continue to hold Kim Il-sung and Kim Jong-il in high esteem.  When I first heard this, it seemed quite odd to me that Un would even include something so obvious in his address.  Of course North Korean peasants will religiously worship their late leaders through a totalitarian personality cult.  Of course they will promote Songun and remain an extremely militaristic country.  These are aspects of their society that have existed since its creation, and habits they have avidly practiced ever since.  There is even a a patriotic song by the Mansutae Art Troupe called “We will hold Generalissimo Kim Il-sung in high esteem forever.” Shortly afterwards, I realized that Kim mentioned this to prepare his audience for the announcements he would soon deliver, to make him not appear overly progressive.  It was a calculative move made by Un, to publicly support the two oldest elements of the regime while proposing reforms.  What was even more surprising was amid his patriotism, Un declared that North Korea shall invest in science and technology, an important objective for the rural nation.  He also proclaimed that the living standards of his people will dramatically improve.  There were very few instances in which he admitted that his country has serious problems.  The few times he did were very subtle.  “We should resolve the food problem of the people and improve their dietary life on a higher level…We should direct great efforts to relieving the shortage of electricity,” he remarked when speaking of how the country’s industries should improve.  When discussing the nation’s early history and their dream for national reunification, Kim went on to assert that actions should be made on the effort of both Koreas to establish peace for the peninsula by having serious diplomatic talks between their leaders.  This alone was the highlight of the address by international media (and his shrinking eyebrows by American media).

We think that it is possible to resume the suspended high-level contacts and hold sectoral talks if the south Korean authorities are sincere in their stand towards improving inter-Korean relations through dialogue.  And there is no reason why we should not hold a summit meeting if the atmosphere and environment for it are created.  In the future, too, we will make every effort to substantially promote dialogue and negotiations.

Kim’s reforms, if implemented and successful, would significantly benefit North Korea, the entire Korean peninsula, and international diplomacy.  However, we do not know if Kim is telling the truth and announcing the policies he actually plans to execute in the new year, or if he is lying like he always does.  Although it might seem small, what really stood out to me in the address was when he brought up some of the major problems of the DPRK, such as the food and electricity shortages, its failed industries, and horrible living conditions, when he elucidated how the industries would change to fix their problems.  The regime is usually keen to admit such problems.  Un’s very small amount of honesty is a sign of slight openness in the regime, and these peace talks desired by Kim are small steps towards North Korea exiting their isolation and entering the modern world.  Improving north-south relations would be a great first step towards this.  The two Koreas have technically been at war since 1950 because the Korean War ended in 1953 with a cease-fire.  On Friday, the South Korean Ministry of Unification responded to Kim’s address by issuing a press release saying that “The R.O.K. government takes the progressive attitude on inter-Korean dialogue and exchange presented in the New Year Address by North Korea’s First Secretary of the Workers’ Party, Kim Jong Un, meaningfully.”  Kim’s calls for a summit have been greeted by the West, but as one could imagine, until he owns up to his regime’s human rights violations and takes actions to end them, like releasing political prisoners or finally shutting down the political prison camps, the international community, especially the United States, will never take him seriously and will continue to isolate his state.

That’s just what happened on Saturday, when it was revealed that the U.S. government slapped North Korea with new sanctions.   The Reconnaissance General Bureau, an intelligence agency believed to manage the DPRK’s cyber-operations, and officials at North Korea’s Mining Development Trading Corporation who are believed to have negotiated in arms dealing, are the targets of these new sanctions.

We’ve been sanctioning the hermit kingdom for decades, but these brand new sanctions are for North Korea’s alleged hack on Sony Pictures.  Despite research done by a few online cyber-security groups which found that former Sony employees arranged the hack, the FBI continues to stick with their initial findings that North Korean hackers undoubtedly performed the hack.  Last month, in the beginning of the whole controversy, President Obama said that due to the severe damage inflicted upon Sony Pictures by the hackers, the U.S. government would respond substantially.  It looks like these sanctions are the beginning of that response, but hitting the poor rural country with sanctions shortly after their leader announces that he aims to pacify their foreign relations might be sending the wrong message, and is perfect material for them to demonize us (which of course they will do no matter what).  I know that its putting Obama and his foreign policy advisers in a difficult situation, but if they want to show the world that they truly value peace, they will encourage peace talks between the two Koreas.  North Koreans always complain about our hostile policy towards them, Kim Jong-un must have said it at least three times in his new year’s address, and by doing something like this, we are just proving them correct.