Rafael Cruz: Obama and Castro are the same 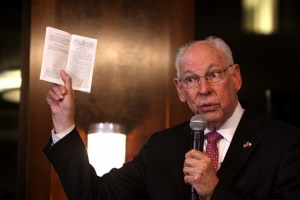 Rafael Cruz, the father of Texas Senator Ted Cruz and a conservative political activist was recently interviewed by Dave Garrison, the host of “Faith and Liberty”, a radio show for conservatives.  During the interview, he compared President Obama to Fidel Castro, claiming that the two “operate by the same rule book” and that they both strive to “eliminate the concept of god” and “make government your god”.  Being very conservative and quite religious, Cruz is obviously very biased in his conclusion on Obama and the whole idea of big government.  Being both an atheist and a socialist, Rafael is directing attacking my beliefs in this argument.  I find it necessary to fire right back at him to defend my beliefs (and also attacking his at the same time).

Here is a clip of the interview, provided by Right Wing Watch:

Despite what Rafael believes, Obama and Castro are not two peas in a pod.  President Obama isn’t even a socialist, unlike Castro, who first identified himself to be a Marxist-Leninist during the Cuban Revolution, and later as a communist.  The two might occupy the same side of the political spectrum, but one is quite moderate, while the other is very far left (that being Castro, of course).  It may be true that leftists are on the same side as brutal tyrants like Stalin and Mao, but the same can be said for conservatives.  On the right, they are accompanied by the Nazis and fascists.  That’s just how the political spectrum is, there are moderates and radicals.  However, Right-wing media and conservatives don’t want you to know this.  They want to brainwash easily fooled Americans into believing that Obama is a dictator who will create a totalitarian state by creating big government, just like Stalin, Mao, or Castro.  This is the idea they present, but it completely disregards the fact that 9.7 million jobs in the private sector have been created during the Obama administration, and thousands of government jobs have been cut because of our President.  But somehow, according to the Republicans (and we all know how trustworthy they are), he’s a Marxist?  He’s extremely pro-capitalism for a socialist, let alone a Marxist.  If he wasn’t the President of the United States, but rather a regular democrat, and entered a room full of Marxists, he’d probably be immediately thrown out for his pro-capitalist views.  Also, when Cruz aimlessly states that in Marxism, “you have to eliminate the concept of God because government has to become your God”, he hasn’t a clue what he’s talking about.  Although Karl Marx was an atheist and called religion the “opium of the people”, he viewed it positively for spiritually saving the suffering masses from the oppression they constantly endure.  It was Lenin who first associated atheism with Marxism, but he never asserted that the government itself must be worshiped as a god.  That would go against his principles of being an atheist.  He would be advocating the same propaganda and intolerance that he denounced for being common aspects of religion.

The notion that Barack Obama, a Christian, is secretly planning to eliminate religious freedom is even more absurd than the idea that he’s a socialist.  Just like anyone who knows about Obama and can think reasonably, I wonder…where and how does Cruz get these outrageous ideas?  Where is his evidence that Obama is attacking religious freedom, let alone being anti-religious?  He doesn’t have it because it doesn’t exist!  Obama isn’t agnostic or atheistic like Republicans try to frame him as.  Cruz doesn’t know that he’s persecuting a fellow Christian.  In what instances has there been in which Obama has been caught limiting people’s freedom of religion?   There aren’t any! This is because we aren’t witnessing “a tremendous attack on religious freedom” under Obama.  A real attack on religious freedom was when the Bolsheviks demolished entire churches and cathedrals in minutes to establish state atheism in the RSFSR.  Those kind of attacks aren’t occurring anywhere in the U.S., and aren’t being promoted by Obama, which proves that Cruz’s fear of Obama declaring state atheism is complete nonsense.  That’s why Cruz can’t use any evidence to support his claim that Obama threatens self reliance or reliance on religion.  He just makes it up as he goes, like little children telling their friends or family made-up stories.

Just like every Republican, Cruz goes so far as to accuse Obama of infringing upon our civil liberties with his big government policies.  Why is it that whenever a Republican President assumes more authority than he’s allowed, conservatives don’t react, but when a Democrat President like Clinton or Obama does anything questionable, they automatically label his as a tyrant, and scream for impeachment?  Idiot conservatives like Cruz are always so quick to criticize Democrats on their actions, but don’t bat an eye when Republicans do anything unconstitutional.  Did they disapprove Bush when he suspended Habeas corpus, incarcerated political protesters in detention camps, or when he opened the Guantanamo Bay prison?  Did they condemn his actions in May 2007 when he issued a “presidential directive” allowing him to assume absolute power over the government following a “catastrophic event”?  Of course not, because they’re on his side. When they’re in control, they don’t have to stand up for freedom or protest against tyrannical actions.  If they did, they’d be defying their party’s leadership.  Now that a democrat is occupying the White House, the Republicans are at the other extreme.  We should be a little thankful that Republican congressmen are actually doing their job and standing up for the American people, even if they’re persecuting Obama way too often.

Also according to Rafael Cruz, the government’s attempts to protect us are actually limiting our liberties.  This too, just like everything Rafael Cruz says, is complete nonsense.  I often criticize the government for being so corrupt, but outside of congress and the courts, and in the offices of the hundreds of small government agencies, our government does so much to protect us from the wealthy capitalists.  Its so ironic that out of all the government agencies that exist, Cruz chooses the EPA to represent a tyrannical government.  The EPA regulates corporations so they won’t pollute the environment with carbon dioxide or pesticides.  It’s thanks to the EPA that we have relatively clean air and clean water.  Look at China as an example.  It’s a country dramatically impacted by industrialization, where wealthy capitalists run free and are allowed to exploit whoever they want and make them work extremely long hours in the worst working conditions imaginable.  These factories release immense amounts of carbon dioxide, pesticides, and harmful gases like Carbon Monoxide, depending upon what kind of factory it is and what it produces.  China doesn’t have an Environmental Protection Agency, so factories go on polluting the environment because they aren’t any laws or regulations to stop them.  This has left China terribly polluted.  Smog haunts and covers the streets of every industrial city, and the people must wear particle respirators over their mouths to prevent them from inhaling the gases.  Here are some pictures to show you what exactly the Chinese people must endure everyday of their lives: 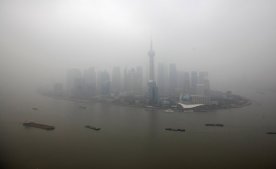 Cruz and every American should be thankful to the EPA for their regulations on carbon-emissions and all they do to protect our environment.  We should also be thankful to our government for establishing the EPA.  That’s one thing we can thank Nixon for.  If we didn’t have it, our environment might not look very different from the one in the pictures above.  Despite this, conservatives like Rafael Cruz continue to demonize the EPA as an instrument of big government, which they despise so strongly that they’d let industries do whatever they please.  “Curse you for saving the environment, EPA!  Let the businesses pollute it until we’re all dead!” they scream. If Cruz wanted to expose the government as being tyrannical, he should’ve used government agencies that limit our freedom and invade our privacy as an example, such as the NSA or CIA.  Both agencies overstep their boundaries of power, and spy on practically everyone.  If Cruz knew about either of them, he would’ve used them in his argument.  The fact that he doesn’t know about them further reveals that he knows very little about our government.  He should ask his son to explain it to him sometime.  After all, Ted Cruz is a Princeton and Harvard grad, and a U.S. Senator.  If he’s such a know-it-all, why doesn’t he just share all the information with his father?  His Dad clearly doesn’t know anything about our government.

As a matter of fact, I think: If the left had their way, they’d do away with the whole bill of rights.

This has to be the single most outrageous statement he’s made in the whole interview.  He seriously thinks that we want to repeal the bill of rights?  Libertarians and conservatives who want small government always praise the bill as a powerful document that protects individual rights from an oppressive government.  They often use it to draw a line between them and the government. It’s true that we leftists like big government, but only if that government respects and protects the rights of its people.  Our bill of rights is the legislation that perfectly represents this sentiment.  The idea that liberals want a totalitarian or autocratic regime is ridiculous.  We care more about freedom than the right does!  Totalitarianism is rooted in radically conservative beliefs, not liberal ones.   If Rafael Cruz had it his way, him and his conservative buddies would completely eliminate the government and let big corporations run the country.  It’s not hard to determine what would happen if such an event occurred.  The capitalists would enslave us all, and leftists like myself would be the first to be executed.

It really is quite amazing that one man could say so much foolish nonsense under two minutes.  I didn’t think such a feat was humanly possible, but Rafael Cruz did it.  Before listening to this clip and reading about him on Right Wing Watch, I hadn’t even known who Rafael Cruz was.  I had heard that Ted Cruz had come from a very conservative family, but I never would have guessed that his father would be this insane.  I’m sorry Mr. Cruz, but you’re never going to get anyone to believe you if you continue to say random things out of your ass without supporting it.  It’ll just make you look even more of an idiot to the public.  You should consider this the next time you’re interviewed, or anywhere in public if you’re going to say some ludicrous bullshit like you did in this interview with Dave Garrison.  I sincerely hope that there isn’t anyone insane enough to believe all the outrageous remarks Cruz made during the interview.  Such an individual seriously needs to be institutionalized.

2 Responses to Rafael Cruz: Obama and Castro are the same